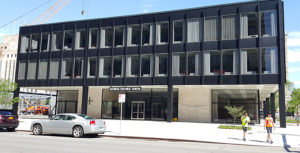 An open house was held Sunday to celebrate the completed rehabilitation of one of Iowa’s architectural gems.

The building at 601 Grand Avenue in Des Moines was designed by Mies van der Rohe. The glass-and-steel structure, completed in 1962, has served as the headquarters for the Diocese of Des Moines and Catholic Charities since 1992.

Bishop Richard Pates says the Catholic Pastoral Center is one of only two buildings in Iowa designed by the famed German architect. “One on the Drake University campus and the other is our building,” Pates said. “I think there are 37 (Mies van der Rohe buildings) throughout the entirety of the United States.” The black steel building in downtown Des Moines originally housed a bank.

The renovation took about a year and cost roughly $9 million. Pates believes it’ll extend the life of the building another 50 years. “We put in fairly new windows and a new plaza outside,” Pates said. “All of the functional parts of the building – the heating, electricity, plumbing – all of that was renewed.” The square, three-story building may not catch the eye of most Iowans who drive or walk past it, but it’s internationally admired by architects and history buffs.

Pates describes the building as simple and stark. “But, attractive at the same time,” Pates said. “(Mies van der Rohe) had the phrase ‘less is more’ and the design or outcome is in the details. It’s a very historic building. Architects come from throughout the world to see it.” Around 70 people work inside the building. The Diocese of Des Moines includes 80 parishes in 23 counties in central and southwest Iowa.