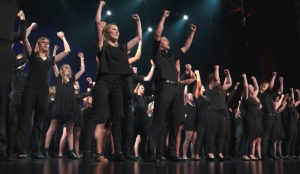 Sarah Florian, with Des Moines Performing Arts, says it’s a tribute to the young people of Iowa and their contributions to the stage.

“We have a record 68 schools participating in the program this year,” Florian says. “It’s a year-long education initiative that starts in the school at their school musical. We send a team of adjudicators out to adjudicate their musical, give feedback, and that’s the foundation of the program.”

One highlight of the night is the announcement of the Triple Threat Award winners, two students who are recognized for their acting, singing and dancing. “Those two students, one male and one female, will be announced at the showcase and in just about two weeks, they’ll be on a plane to New York City to represent us at the National High School Musical Theatre Awards,” she says. “It’s a very exciting part of the evening.” Florian says dozens of students will be singled out for awards.

“This year we have a new technical theater scholarship that will be given out and that is a $10,000 scholarship for one student,” Florian says. “So, we’re also celebrating students back stage, on stage and the adults who help make it all possible.”

The event starts at 7 p.m., and for those who can’t attend, it’ll be streaming live on Iowa Public Television at iptv.org.