You are here: Home / Agriculture / It’s a national day dedicated to cheese 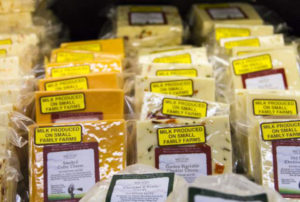 Today is National Cheese Day and it appears more Iowans are making and eating the dairy product than ever before.

“They are going out and trying new, more expensive cheeses that are out there in the market, which is exciting to see,” Clark says. “I think that’s part of the reason why some of our specialty cheese shops are doing well and even the specialty cheese areas in some of our grocery stores.” A recent survey found the three most popular cheeses in the U.S. are cheddar, mozzarella, and American.

Iowa dairy operations make roughly 20.5 million pounds of cheese a year, placing Iowa 8th in the country among the top cheese-producing states. Clark says there are around 220,000 milk cows in Iowa, with the average operation having a herd of 50 cows.

“So, we do have some large production facilities, but we have a lot more smaller ones,” Clark says. There’s an opportunity for some dairy farms to boost revenue. Clark notes Iowa produces more milk than we process in the state.

“In my mind, this is an opportunity,” Clark says. “Because a lot of milk is being sent out of state, it’s an opportunity for our farmers to actually consider doing some value-added agriculture on farm.” She suggests farmers could turn milk into cheese and make more money than they would be simply shipping milk out-of-state.