You are here: Home / News / Pate will reveal source of erroneous texts after polls close

“Every indicator is it will be a significant turn-out,” Pate said early this afternoon.

Nearly 50,000 voters asked for an absentee ballot — a record number for the “early” voting period. Early this morning, Pate announced election officials in five counties received reports of text messages that were directing voters to the wrong precinct.

“The county auditors from Black Hawk, Johnson, Linn, Polk and Winneshiek Counties reported the issue to us this morning. We believe the erroneous text messages were sent in error by a campaign and their intent was not malicious,” Pate said this afternoon.

Pate does not plan to reveal the name of the campaign that officials believe was responsible for those texts until after the polls close this evening.

“Until we have confirmed and verified all the details, we will not be making any additional comments at this time, but we have been in communication with the counties and the political parties, so they’re well aware of this measure and it think it’s under control,” said Pate at a news conference this afternoon. 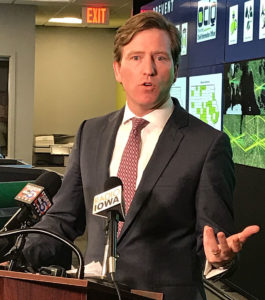 An official from the U.S. Department of Homeland Security joined Pate at the event to discuss cyber security. Pate emphasized that there is a paper ballot for each vote being cast in Iowa elections.

“We don’t do it on the internet,” Pate said. “We don’t do it through email, so — again — there’s nobody in Moscow, Russia who’s changing or voting for you.”

Chris Krebs is one of President Trump’s nominees to serve as a top administrator in the Department of Homeland Security. He said the agency is prepared to offer technical assistance and training to the state and local officials who conduct elections in the United States.

“Make no mistake, what Russia attempted during the 2016 elections was unprecedented and it’s unacceptable,” Krebs said. “That ‘s why at the Department of Homeland Security and with some of our other federal government partners, we’re investing significant resources in providing that state and local support.”

But Krebs said there are “measures and controls in place” to deal with attempts to hack into voting systems.

“These are things that have been known and dealt with for many years,” he said, “but we have to communicate with the voting public…that when they cast their vote, it’s going to be counted and counted correctly.”

There will be a national exercise this summer to test responses to “the bad things that might happen” with election systems, according to Krebs.

“The most important thing we can do is ensure that voters have confidence in their election systems,” he said.

Cyber security workshops for county auditors will be conducted in Iowa later this month, on June 20th and 21st, to outline the federal resources that are available. Pate has deployed a couple of staff to work in the state’s Information Security Operations Center where traffic on state websites, like the Secretary of State’s, are monitored.