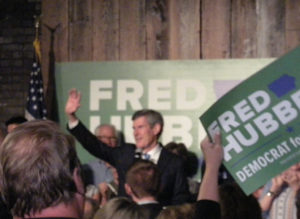 Fred Hubbell acknowledges his supporters before his victory speech.

“Tonight’s results send a very strong message. Iowa voters have had enough of the heartless and misguided policies and priorities that have taken our state backward,” Hubbell said.

Hubbell will face Republican Governor Kim Reynolds in the General Election and he used his victory speech to ridicule her record.

“Are we going to continue with the failed Governor Reynolds polices?” Hubbell asked, prompting the crowd to shout “no” in response, “(Policies) that have decimated our schools, denied Iowans health care while giving our tax dollars to wealthy out of state companies?”

Hubbell blamed the governor for what he called a lack of bipartisanship in the Iowa Legislature.

“You know it used to be that you could talk to folks on the other side of the aisle. You know what that was like. You might disagree on how you solve a problem, but at least you would agree on what the problem was,” Hubbell said. “When I look at these last two legislative sessions, it’s clear to me that the problem is Governor Reynolds.”

Iowa is at a crossroads, according to Hubbell.

“You know there’s farmers out there who fear a needless trade war is gonna cost them their farm. There’s students that are burdened by the crush of loans that they are never going to pay back. And there are grandparents praying that their children will move back to Iowa and raise the next generation of Iowa families,” Hubbell said. “I am running on a vision of getting Iowa growing in the right way — and a record of knowing how to get results for people.”

Hubbell finished his speech by asking supporters to not let up.

“Over the next few weeks think of a friend, a neighbor or a family member that you can reach out to, to share our message and help grow this movement,” Hubbell said.

Governor Reynolds wasted no time in targeting the man who will be her opponent in the General Election. Speaking before supporters at the Iowa GOP headquarters in Des Moines last night, Reynolds blasted Hubbell’s  lifestyle and bank account.

“My opponent, he grew up very differently from most of us…and that’s okay, because we celebrate wealth in this country,” Reynolds said. “And the issue isn’t that Fred Hubbell has been rich his entire life. It’s that he has no idea what it’s like not to be.”

Reynolds talked about growing up in St. Charles, waiting tables and checking groceries at Hy-Vee and contrasted that with Hubbell, the former CEO of a life insurance company whose family built a fortune over the decades in finance, railroads and real estate.

“He has no idea what it’s like to balance a family checkbook or to make the tough decisions most of us make each and every day when we’re trying to make ends meet,” Reynolds said.

Reynolds, who ran unopposed in Tuesday’s primary, continued to poke at her November opponent, casting Hubbell as a wealthy elitist.

“Just last week, Fred admitted that he doesn’t think Iowa is the best state in the country to live,” Reynolds said, drawing boos from the Republican crowd. “Well, Fred, if you don’t think that Iowa is the best place to live, then you absolutely don’t know the Iowa that I know.”

Hubbell spent $7 million on this primary election, including $3 million of his own money.

Reynolds, who has been Iowa’s governor for a little more than a year, is asking Iowans to elect her to a full, four-year term this November.

Hubbell won the Democratic Primary with 55.6 percent of the vote according to unofficial results from all 99 counties. His closest challenger was Cathy Glasson, the nurse and union organizer. She finished with 20.5 percent. Glasson spoke to supporters gathered in an Iowa City bar, then issued a written statement saying her campaign had started a movement that would bring progressive change to Iowa.

Supporters of John Norris cheered as he entered a Des Moines bar Tuesday night to watch election returns.The celebration didn’t last long, as Norris finished third in the race for the Democratic nomination for governor.

“We knew when we got in this race that we were fighting the odds,” Norris said.

The 59-year-old Norris, a long-time, behind-the-scenes mechanic in election victories for John Kerry, Tom Vilsack and other Democrats, plans to stay “out and about” helping other Democrats win this fall.

“It’s very important that we get back (control of) the House and the Senate. I met several great candidates out there that I’d love to be helpful for because that’s what it’s going to take to turn this state around,” Norris said. “I’m just as in love with our state today as I was when I started this campaign. The fight for social economic justice, unfortunately, will be needed going forward.”

Former Iowa Democratic Party chairwoman Andy McGuire, a doctor from Des Moines, finished in fourth place. McGuire was able to raise enough money to run TV ads featuring her riding an ambulance to the state capitol, but got about five percent in the final tally of primary votes.

State Senator Nate Boulton suspended his campaign two weeks ago after three women accused the state senator of sexual misconduct. Boulton’s campaign had stressed early voting and he finished fifth, with about five percent of the vote.

Libertarians are now an officially recognized party in Iowa and a dozen Libertarian candidates were listed on the party’s primary ballot. Jake Porter of Council Bluffs secured the Libertarian’s nomination for governor with 54 percent of the 1769 votes cast.