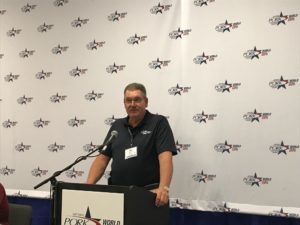 The president of the National Pork Producers Council says pig farmers are taking a financial beating as the Trump Administration seeks to reduce the U.S. trade deficit.

“The president has said he wouldn’t abandon farmers and we’ve taken him at his word, but we need him to end these trade disputes now,” says Jim Heimerl, an Ohio hog farmer who leads the organization.

Heimerl is in Des Moines this week for the World Pork Expo. He had this message for reporters during a news conference.

“I wanted to come here wearing band aides to get the point across to you, to say that, you know, we are bleeding,” Heimerl says.

According to an Iowa State University analysis, hog futures have plummeted $18 per head since China first proposed retaliatory tariffs.

While that drop isn’t completely due to trade issues, Heimerl indicated it’s the dominant factor and involves more than just the impasse with China.

“Now, with Mexico’s action, the toll on rural America will mount,” Heimerl said.

“We need to get this fixed now. Mexico is the number two export market for pork and China is number three,” Heimerl said. “We appreciate all the trade issues the administration is balancing, but we are startking to take on water fast.”

Heimerl Farms is located outside of Columbus, Ohio, and operates 140 livestock barns and a feed mill. About 20-thousand people are attending the World Pork Expo in Des Moines. A thousand of them are international visitors, representing 40 different countries.