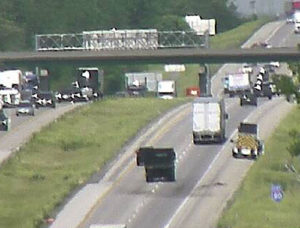 Traffic on Interstate 80 near Des Moines.

This is the last day of a special program conducted by the DOT’s Office of Motor Vehicle Enforcement to check the big rigs that roll across Iowa’s highways. Sergeant Blake Wittrock says it’s an international event called “Roadcheck.”

“They’re checking brake components, cargo securement, equipment with the truck and the trailer of the vehicles, as well as the paperwork with the driver. So, it’s the complete inspection, the most comprehensive one that we do,” Wittrock says.

There is a special emphasis on making sure the drivers are following the regulations for the amount of time they can be on the road. That involves a check of what’s called the ELD.

“It’s electronic logging device. So it’s the electronic system that’ sin the truck that’s hooked into the engine components, the brains of the truck. They are going to be using that as their log book,” Wittrock says. “And it will record their hours, their mileage, different documents if you will for the trip.” Wittrock says the electronic devices make it easier for truckers to keep track of their driving — and makes it easier to check on them to be sure they follow the rules.

He says commercial drivers can drive 11 hours of driving with three hours to do other tasks in a day, and then at there is a 10 hours off duty in what’s known as the sleeper or rest period. Another part of the Roadcheck is to work with drivers to educate them on how to spot and report human trafficking.

“When we do our inspections or conduct our safety inspections we are advising them what to look for when they are out there because they are in the trucks stops, they are on the road and they see things that we don’t always get to see, and we just encourage their assistance,” according to Wittrock. Wittrock says drivers are willing to help out and he says it helps build a little camaraderie between the officers and truckers.

“When people get inspected they kind of think it’s a bad thing. We’re just looking for compliance,” Wittrock says, “then we can also ask them to help us and work together as a team to combat this issue that’s out there, that’s moving up and down the roadways every day.” Each driver will be given a Truckers Against Trafficking wallet card which provides them with the Human Trafficking Resource Center hotline 888-3737-888 and some guidelines on what information to report.

Wittrock says officers do routine checks of trucks every day, but this is a little more concentrated over a 72-hour period along the major highways.