You are here: Home / Agriculture / Honey bees making a comeback in Iowa 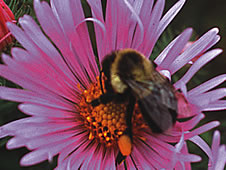 “I’m happy to say that things are going pretty well right now in this blink in time. There are a lot of bees out there that are building up quite nicely through this spring and there are a lot of plants that are coming into bloom for them,” Joseph says.

In addition to producing a sweet, sticky food substance, honey bees play a role in the pollination of all kinds of agricultural crops. A harsh winter in 2014 devastated Iowa’s honey bee population with losses of colonies as high as 65-percent.

Joseph credits backyard beekeepers for helping re-establish some of the colonies. “Ten years ago, we think we had around 1,500 beekeepers in the state of Iowa. I think we have about three times that number now and we’re seeing that number reflected in our Iowa Honey Producers Association membership as well. It’s just doubled and redoubled again,” Joseph says.

According to Joseph, beekeeping supplies are easy to find in Iowa. He says in most parts of the state, if you wake up one morning in April or May and decide you want honeybees, you can establish a hive by the end of the day.