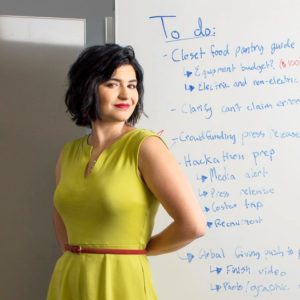 An Iowa native is being named one of the ten College Women of the Year by Glamour Magazine.

Maria Rose Belding, of Pella, is a senior at American University, majoring in public health. Belding is also co-founder and director of a national non-profit group that helps food pantries share food and feed the needy.

This is the 61st year for the Glamour list, which once included a young Martha Stewart.

“It’s a really cool legacy of young women doing cool stuff,” Belding says. “It’s based on extracurricular activities, your grades. Almost everybody on the list this year is running an organization, running a company, running an initiative, doing something really cool both in and outside of the classroom.”

Belding is co-founder of the MEANS Database, which stands for Matching Excess And Need for Stability. The interactive website allows food pantries and soup kitchens to quickly coordinate exchanges of excess food items between each other and local donors — preventing food from ending up in landfills.

The 22-year-old is humble about the recognition by Glamour.

“Reading the bios of the other winners, I was just sitting there going, ‘What am I doing on this list?'” Belding says, laughing. “All of us got on a call together via Facetime and it was remarkable because every single one of us had the same thoughts, ‘What are we doing on this list?'”

The MEANS Database is a free program that was launched in 2015 and is now used by hundreds of food pantries in 49 U-S states and territories. It’s helped move — and save from spoiling — one-point-seven million pounds of food. 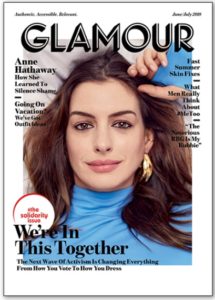 So, why is Belding on the Glamour list? It’s not common, she says, to be running a national organization while also being a full-time undergraduate student.

“It’s not very common because it’s hard and kind of frustrating and awful at times but it is possible,” she says, again breaking into laughter. “Most people don’t get the opportunity to do what I’ve done in undergrad and really be able to build a company and make a pretty big impact while also getting your degree.”

Belding and the others are being featured in the June/July issue of Glamour.

“Each of us gets about $3,000 which is fantastic because none of us get paid very well to run the initiatives that we’re running, if we get paid at all, so that will be lovely,” Belding says. “That will definitely be how I’m paying for my organic chemistry textbook this fall. The publicity, obviously, is really wonderful and getting to meet these other young people is fantastic.”

The isn’t her first time in such a spotlight. In 2015, the international cosmetics company, L’Oreal, named Belding one of its ten “Women of Worth,” out of 6,000 nominees globally.

Belding plans to graduate in May of 2019, take a year off, and then head to medical school.

Hear the full interview below: