You are here: Home / News / Weekend storms in north central Iowa, half of Mason City flooded 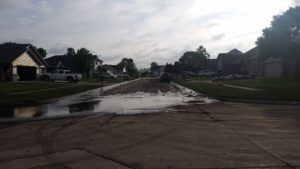 “We estimate that probably better than 50 percent of the 28,000 residents in Mason City experienced some type of water damage, mostly basement flooding, so there’s been a lot of people impacted by this,” Mason City Mayor Bill Schickel said, “some very severely and then some much more of a minor situation.”

There were evacuations on Saturday night.

“We had a number of residents impacted by the flood along the Winnebago River and other parts of Mason City,” Schickel said. “We notified 90 residents for a voluntary evacuation. Our police, fire and emergency management personnel went door-to-door in Mason City in the neighborhoods along the Willow Creek.”

One resident sought shelter at the Salvation Army. Sandbags for homes and businesses are available at the city’s maintenance headquarters. As Mason City residents started the clean-up Sunday, they’ve been placing damaged items on the curb, including large things like freezers and sofas, but Schickel said garbage crews won’t be hauling those things away until the city is out of its state of emergency.

“Hopefully if we get out of the woods later on Monday or Tuesday, we can start looking at those clean-up kinds of things,” Schickel said.

“Carpets, furniture — clean that outside,” he said. “If you can’t clean it, please dispose of it. Otherwise rinse everything down (with) a bleach mixture and the instructions are with that are very important. There are some health risks as far as mold and if there happens to be sewage, there’s some other situations too.”

For example, water heaters and furnaces impacted by flooding should be inspected before put in back in use. A number of roads outside of Mason City have been damaged by flooding. Mason City’s police chief asked residents to stay off the roads if more than an inch of rain falls in the next 24 hours, as street flooding would likely throughout the city. The city’s operations manager is asking residents to reduce water use, as Mason City’s sanitary sewer plant has been running at capacity and suffered some minor damage from this weekend’s storms.