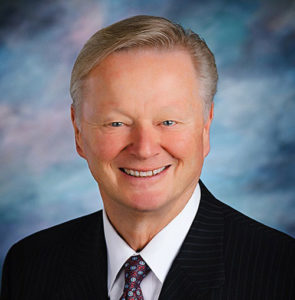 At least two Iowa mayors are at the U.S. Conference of Mayors which will conclude its three-day run in Boston today.

Mayor Roy Buol of Dubuque says one of the weekend’s keynote speakers was Facebook COO Sheryl Sandberg, who announced a plan to train one-million people and small business owners in social media use nationwide by the year 2020.

“Social media is here to stay and keeps expanding,” Mayor Buol says. “There’s got to be some regulation on truth and fact and they’re certainly working toward that. On the privacy issue, I think Facebook is front and center on trying to address that and make sure people’s information is not shared when they don’t want it shared.” Buol says he’s inspired at these meetings by other mayors who talk about redeveloping and revitalizing downtowns, especially when the community is involved in the planning process.

“I was told by a previous mayor that no one would ever live downtown in Dubuque,” Buol says, “and you know today, it’s a vibrant hub again of our community with 8,000 people employed there.” Buol is in his 13th year as Dubuque’s mayor and he served for a decade on the city council before becoming mayor. After many successes in Dubuque over the 23 years he’s been in office, Buol says he sometimes finds himself in more of a teacher role than that of a learner at the conference, as other mayors want to know his secrets.

“Dubuque has done a lot of great redevelopment,” Buol says. “They’re interested in how we did it and how we made it affordable to do. I talk to them about the different grant opportunities that we’ve availed ourselves of.” Over the years, Buol says Dubuque and its partners have landed more than 550-million dollars in grants for a host of redevelopment projects. Des Moines Mayor Frank Cownie is also attending the Boston conference.