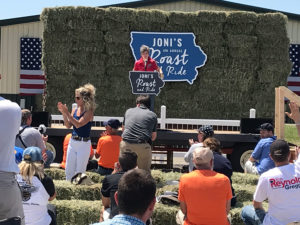 Senator Ernst talks to the Roast and Ride crowd.

Republican Senator Joni Ernst is joining her friend and political ally Kim Reynolds in questioning whether weathly businessman Fred Hubbell — the Democratic nominee for governor — has the proper kind of Iowa roots.

“Kim is Iowa through and through and I wish I could say the same about her Democratic opponent, Fred Hubbell,” Ernst said Saturday, “but I can’t.”

Ernst’s fourth-annual “Roast and Ride” fundraiser attracted about a thousand people in Boone Saturday afternoon. Ernst led a long line of motorcycles on a 49-mile ride to the event, with Governor Reynolds alongside, riding on the backseat of her husband’s motorcycle.

Ernst told the crowd the governor’s opponent “doesn’t appreciate” the state. “Fred was asked if he thought that Iowa was the best place in the country to live and what did he say? ‘No,'” Ernst said. “Are you kidding me? We have a gubernatorial candidate…who doesn’t think this is the best place to live. I have never heard anything more ludicrous in my life.” 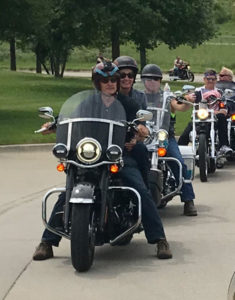 Governor Kim Reynolds and her husband on the ride.

During a debate in late May, Hubbell said voters are “dissatisfied” with the status quo and he disagreed with a recent magazine analysis which ranked Iowa as number one among the states in terms of infrastructure, health care and education.

Reynolds mentioned Hubbell’s remarks during her speech at the Ernst fundraiser.

“Well, Fred, if you don’t think Iowa’s the best place to live, then you just don’t know Iowa,” Reynolds said Saturday, to cheers.

And Reynolds again suggested Hubbell, as part of a prominent Des Moines family, is unable to relate to ordinary Iowans.

“I want Iowa to continue to be a place where it doesn’t matter where you come from, only where you want to go,” Reynolds said, “…a place where hard work and big dreams are more important than famous names and big checks.” 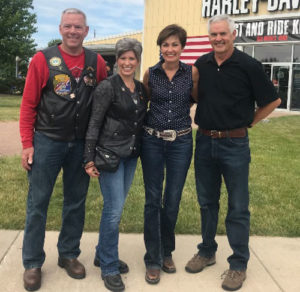 Senator Ernst and Governor Reynolds with their husbands

The Hubbell’s family fortune dates back to the mid-1850s, from investments in real estate, railroads and the founding of a Des Moines-based insurance company. Fred Hubbell has contributed $3 million of his own money to his campaign so far and he’s offered this response to Reynolds’ criticism.

“She can attack me all she wants. My wife and I have had a lot tougher experiences than that and so that doesn’t bother me a bit,” Hubbell said on Iowa Public Television this weekend.

That’s a reference to the couple’s experience as hostages to airplane hijackers back in 1981. Hubbell touts his experience in corporate boardrooms as an asset.

“We’re going to continue to talk about where we want to take this state,” Hubbell said. “You know, she has done a terrible job of balancing the state’s checkbook.”

Hubbell pointed to last fall’s withdrawal from the state’s cash reserves to balance last year’s budget and the mid-year cuts to this year’s state budget.