You are here: Home / News / Ernst calls talks with North Korea a first step on a long road 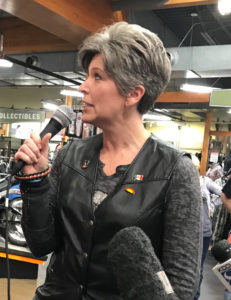 “We have faced a nuclear North Korea for quite a while now. That’s something we don’t want to face and so the president is attempting to address that,” Ernst said this weekend. “Now, it’s a two-way street. The North Koreans have to want to play as well and so we hope that Kim Jung Un will step up to the plate.”

Trump is scheduled to meet one-on-one with North Korea’s leader tomorrow in Singapore and Trump told reporters there this morning he is “hopeful things could work out quite nicely.” Ernst cautioned that the meeting in Singapore is “just a first step.”

“This is a long road, but we hope that the North Koreans will be compliant,” Ernst said.

On the way to Singapore, Trump lashed out at Canada’s prime minister over unresolved trade disputes. Ernst spoke with reporters on Saturday morning — before the dust-up.

“Canada is not good for our agricultural products. They push back on our dairy and if they want to negotiate in good faith, they’ve got to give a little as well,” Ernst said.

Ernst has said it’s important that the renegotiation of NAFTA be completed or Trump may strike a deal just with Mexico. Trump’s blast at Canadian Prime Minister Justin Trudeau came after Trump, Trudeau and the other leaders of the world’s top seven industrialized nations met in Canada. Ernst downplays the idea U.S. alliances would be easily damaged.

“You have to remember it’s not just the president who works with delegations from other countries,” Ernst said Saturday during a news conference at her “Roast and Ride” fundraiser. “We hae senators. We have congressman. We have the state department. We have a lot of wonderful folks that will work through any difficulties that might seem to appear on the surface.”

On Sunday, Trump’s top trade negotiator said there was a “special place in hell” for Trudeau, who he accused of stabbing Trump in the back by saying Canada would not be bullied by the U.S.