You are here: Home / News / Ferry service to help commuters across the Mississippi River during work on Sabula bridge 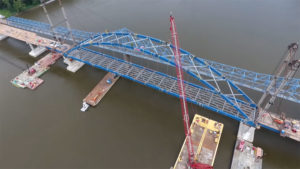 Ferry and bus service will start this week to help residents around Sabula, Iowa and Savanna, Illinois cross the Mississippi River after a bridge project delay.

Bob Younie, maintenance director for the Iowa Department of Transportation, says the $80 million main channel bridge is almost done, but a smaller bridge on the Iowa side is having foundation trouble and needs to be rebuilt.

“Our plans were to drill shaft piling 150 feet into sand to hold the bridge up and we do this stuff all the time, except the sand didn’t cooperate with us,” Younie says. “We had to do some redesign and reworking so that we have a safe bridge and that’s going to take an extra three months to get that done.” That project was originally going to take 40 days. Sabula and Savanna residents who need to get to the other side of the river have a 36-mile commute to the nearest bridge — at Clinton. Starting Tuesday, a ferry will begin offering free service between the cities.

“It’s a 15-vehicle car ferry, no commercial vehicles though, just normal passenger vehicles and pickups,” Younie says. “It also takes passengers. That’s going to be crossing the river between Sabula and Savanna, just going back and forth for 12 hours in a day.” It’ll run from 6 A.M. to 6 P.M. weekdays and from 8 A.M. to 8 P.M. weekends. A transit bus service is also being launched today between the communities.

“There’s going to be a morning service and an evening service between Savanna and Sabula, just a normal passenger bus,” Younie says. “The two cities have worked in cooperation with local employers and they’ve established some stops that we’ll be using and some times of operation. We think that also will return some mobility to the citizens and we’re really excited about that.”

The ferry service alone will cost $7,000 per day to operate, which Younie says is actually cheaper compared to the lost cost to citizens who are having to commute back and forth. He couldn’t estimate how many people will use the ferry or the bus, but hopes those who’ve been impacted by the bridge work will give it a try. The construction project should be done by early September.