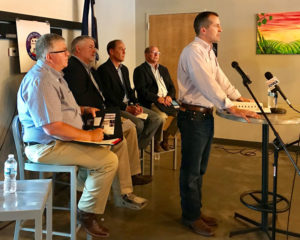 No candidate got at least 35 percent of the vote in last week’s primary to secure the GOP nomination outright, so delegates at the Iowa GOP’s state convention will choose a nominee this Saturday.

Mike Naig replaced Bill Northey as state ag secretary in early March when Northey left for a job in the Trump Administration. Naig was the first place finisher in last week’s primary, with a fraction less than 35 percent.

“It is absolutely critically important that we maintain conservative leadership in the secretary’s office at the Department of Ag and we must be prepared for a competitive race against the Democrat candidate in November and so we’ve got to put our best foot forward,” Naig said. “I think the experience that I bring being in the office really brings a lot to the table.”

(See audio below to listen to each candidate’s remarks Tuesday night in Altoona.)

State Senator Dan Zumbach of Ryan was the second-place finisher in the primary, with about 20 percent of the vote. Zumbach emphasized his work in the legislature.

“This isn’t where I thought I’d be. I never thought I’d be a public speaker. I’m much more comfortable sitting in a tractor with the radio turned up, but here I am in front of a group of folks in Des Moines,” Zumbach said. “…Allow me to utilize my talents, my hard work and my passion to represent you.”

Craig Lang of Brooklyn was the third place finisher in the primary. Lang said his experience on the board that governs the three state universities as well as being a former Farm Bureau president equipped him for this new job.

“Our nominee must be prepared to take the battle to the Democrat nominee and win,” Lang said. “I ask you to judge my future ability to serve as your secretary of agriculture by judging my decades-long past performance of fighting and winner the fights that matter.”

Ray Gaesser of Corning, the past president of the Iowa and American Soybean Associations, argued those posts gave him experience in foreign export markets as well as with congress in writing the Farm Bill.

“I really don’t need a job. I really don’t want to be governor either or anything else,” Gaesser said. “I want to be the best secretary of agriculture that I can be and, I promise you, if you vote for me and elect me, I will be. And I know how to support the party.”

Chad Ingels of Randalia was the last place finisher in last Tuesday’s primary and Ingels told last the crowd he’s not at all embarrassed about it.

“I spent a fraction of the money on my campaign as the other candidates did,” Ingels said. “…I’m very proud of the 8000 votes I got in the last election and hope to get many more on Saturday.”

The Iowa Republican Party’s state convention schedule seems to indicate the process of selecting the GOP nominee for this post will begin early Saturday afternoon.