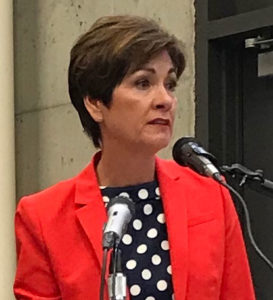 The governor fired Iowa Finance Authority director Dave Jamison about 11 weeks ago, after two women in the agency complained he was sexually harassing them. Jamison got more than $3,000 worth of unemployment before the governor’s staff appealed to stop the payments. Reynolds says filing an appeal earlier would have revealed the identity of the women who came forward.

“Breaking the confidence could lead to really chilling effects in preventing other employees who were experiencing either sexual harassment or discrimination from coming forward and I said that from the very beginning,” Reynolds said during a news conference today in Pella. “They asked us to maintain their confidence. We did that.”

Reynolds indicated once one of the women agreed that her letter outlining the accusations against Jamison could be publicly released, an appeal could be filed to try to stop Jamison’s unemployment checks.

“I don’t believe that anybody that’s fired, you know, for credible allegations of sexual harassment should receive unemployment and the judge agreed with that,” Reynolds said today.

Reynolds staff at one point told Associated Press reporters there were no documents related to Jamison’s firing. A few days later the governor’s staff revealed there was paperwork. Then, after getting permission from one of the victims, the governor’s office released the long letter one of Jamison’s employees wrote about the alleged harassment. It warned Jamison’s bad behavior was escalating and it made women in the agency feel unsafe at work.