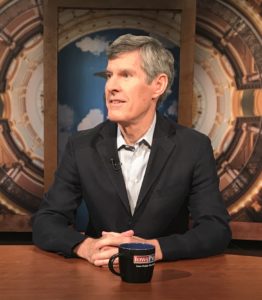 Republican Governor Kim Reynolds and the Iowa GOP are attacking the Democratic candidate for governor for closing Younkers stores in Newton and Spencer 28 years ago when he was chairman of the department store chain.

“If you think eliminating jobs in rural Iowa is the right way to lead, then you don’t know Iowa,” Reynolds said Saturday during a speech in Boone.

Hubbell’s campaign spokeswoman says more than a thousand employees were added to the payroll during Hubbell’s tenure at Younkers — in contrast to the child abuse investigators, mental health workers and hundreds of other critical state employees who’ve been cut during Reynolds’ time as lieutenant governor and governor.

The Iowa Republican Party has accused Hubbell of lying about why the two Younkers stores were closed. This is what Hubbell said during a weekend appearance on Iowa Public Television’s “Iowa Press”:

“We did close a few very small stores. Most of them were actually what we call clearance stores in Council Bluffs and one in the Eastgate Shopping Center (in Des Moines), but the reality is we bought the Brandeis business and we added a lot of new stores to Younkers and we hired a lot more people.”

Younkers bought the 11 stores in the Omaha-based Brandeis chain in 1986. Hubbell said the Farm Crisis was a tough time for the entire state and his goal was to keep Younkers solvent.

“We had to take tough steps to make sure we kept our business open and we employed as many people as possible,” Hubbell said on IPTV. “We started Farm Aid concerts…We gave out Farm Aid scholarships to help kids go to school. That was a tough time, but our commitment was always to make sure our business was stable and could grow and could employ as many Iowans as possible.”

The Iowa GOP cites news accounts from 1990 suggesting the Newton and Spencer Younkers stores were closed to maximize profits for the chain.

This is how Iowa GOP chairman Jeff Kaufmann described Hubbell Saturday: “Prince Frederick, which I like to call him, has nothing to do with Fred Hubbell’s wealth and the fact that he’s a trust fund guy who didn’t earn it,” Kaufmann said. “It has everything to do with attitude.”

Hubbell said he’s not deterred by Kaufmann’s personal attacks because he and his wife went through a lot worse when they were held hostage by airplane hijackers in 1981.

Hubbell’s campaign spokeswoman said Reynolds and her fellow Republicans are trying to mislead Iowans about Hubbell’s record in private business to divert attention from Reynolds’ “disastrous record” as governor.