You are here: Home / Business / Casey’s sees impact of winter weather and changes in hours in 4th quarter 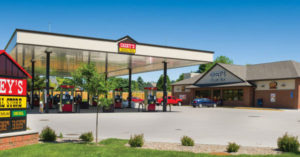 The company reported diluted earnings per share of $8.34, which includes the one-time impact of $4.53 per share related to the adoption of the federal tax cuts for the year ended April 30, 2018. That compares to $4.48 for the same period last year.

Chief Financial Officer, Bill Walljasper, talked about the issues in a conference call for investors, saying the weather hit the sales of all items in the store. “Depending on the category you are looking at — it would range from a one to three percent impact,” Walljasper says. Sales of the prepared foods like pizza were down overall 1.3%, while other sales of other merchandise in the stores was down four-tenths of a percent in the fourth quarter.

Walljasper says April was the worst month and he says it was really noticeable in some areas as store traffic fell off. “Packaged beverages and beer were probably two of the items that would be the most dramatically impacted,” Walljasper says. “In contrast to that, obviously May started off with some very favorable weather and so we are seeing now double-digit increases in packaged beverages and high single digits in beer as well.” He says they saw the number of customers increase by 400 to 500 in stores in May as the weather improved.

Walljasper says a snowy February also saw drop compared to last year when the weather was unseasonably warm. He says they had more than one million dollars more in snow removal costs this winter. Another impact to the bottom line came in the decision to cut back pizza delivery and a cut in the number of stores which stayed open 24-hours.

“Roughly 400 of those were made in Q-four and with respect to pizza delivery — we made changes in about 100 to 110 locations,” according to Walljasper. “Not necessarily pulling back completely in pizza delivery — but maybe moving stores that used to be seven days a week down to four days a week. Walljasper says the changes were based on what was best for each store.

“It was really and hour-by-hour profitability analysis and so each store will be a little bit different,” he explains,”some stores we pulled completely back from a 24-hours. Basically that would be that midnight to five A.M. period. Some we just carved back three hours. It really depended on a store-by-store basis.”

He says the changes in store hours and delivery will overall end up saving more than one million dollars in expenses. Walljasper says rising gas prices led them to their lowest margin on gasoline for a quarter since 2014 — but he says the number of gallons sold was more than the report on miles driven — indicating they are getting more business from competitors.

Walljasper says they have plans to increase the fuel margin through “product optimization.” That includes adding biodiesel fuel to some stores. He says they will making roughly 350 changes to stores to add either premium gas or diesel, which he says have higher profit margins. Walljasper says they are working on a “Value Creation Plan” and hired a chief marketing officer to increase the promotion of instore items that he believes will help improve sales.

The company raised the price of some food items, including pizza slices, in May and he says that did not hurt sales. Walljasper says they plan to increase the price of donuts in July after finding they were underpriced in the market.