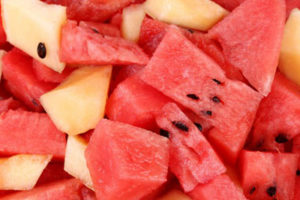 Federal officials are warning consumers and retailers in Iowa about packaged fruit that’s linked to a salmonella outbreak.

There’s a recall for sliced watermelon, honeydew melon, cantaloupe, and other cut fruit that was packaged by Caito Foods of Indianapolis, Indiana. The fruit was sold in a plastic container shaped like a clamshell. Costco, Trader Joe’s, Walmart, Walgreens and Whole Foods are among the retailers that sold the products.

Iowa was just added to the initial recall which covered four other states.

The Centers for Disease Control has not updated its mapping of cases connected to the outbreak. The agency reports that by late May, 60 people in Missouri, Illinois, Indiana and Michigan were sickened by salmonella linked to these fruit products. Half of those struck by the illness were hospitalized. No deaths have been reported.