You are here: Home / Sports / Sioux City native Shelby Houlihan will return to Iowa for the USA Outdoor Track and Field Championships 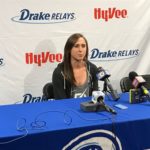 “I feel like I don’t get to go back often enough to race and even to visit”, said Houlihan. “I am really exited to go back and my whole family will be there.”

Houlihan has been training in the high altitude of Mammoth Lakes, California, since April and her times have been dropping. She won the 1,500 at the Prefontaine Classic in May and shaved four seconds off her personal record in the process. Houlihan is the top ranked American and currently ranked number four in the world at that distance.

“Workouts have been going really well and I have felt really strong. I have been able to stay healthy for the most part so I think everything is clicking.”

Houlihan finished 11th in the 500 meters at the Rio Olympics in 2016. She returned to Sioux City last October where a street was named in her honor. Houlihan Run is near East High School.

“It’s pretty cool”, added Houlihan. “I am really glad that my community has been able to get behind me and be a huge support group and do that for me. That was a really cool thing to go back for.”