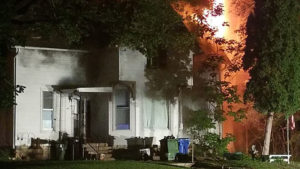 Fire damaged this house turned into apartments in Charles City.

A house, divided into apartments, was badly damaged in an overnight fire in northeast Iowa – but no one was injured.

Charles City Fire Chief Eric Whipple says crews were sent to the home at 407 South Main Street in Charles City shortly before midnight. “When we arrived, we found fire coming out of an upstairs window on the north side of the structure,” Whipple said. “We were able to knock down the fire rather quickly from the exterior of the house.” Firefighters from Charles City, Floyd, and Colwell all responded to the scene.

“This apartment building was a triplex and everyone escaped the fire safely,” Whipple said. It remains unclear what may’ve sparked the fire.

“We don’t have any determination yet, it’s still under investigation,” Whipple said.