You are here: Home / News / Last days of spring going out with a heat wave 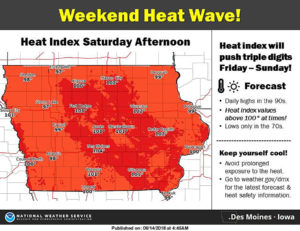 Another big change in the weather is coming, one that’ll feel like it’s mid-summer, though we still have a week of spring left.

Meteorologist Kurt Kotenberg, at the National Weather Service in metro Des Moines, says yes, it was already really hot a few weeks ago, but the next several days promise to be the hottest of the year so far.

“There’s very high confidence that temperatures will be in the middle 90s Friday, Saturday, Sunday and Monday,” Kotenberg says. “Heat index values will be pushing anywhere between 100 and 105 degrees in the metro area and across most of the state we’ll be pushing triple digits.”

He reminds us, it’s not even summer yet. That season officially arrives next Thursday but Mother Nature doesn’t always follow the calendar.

It’s been a strange few months for weather, after a prolonged winter with late snows, a shortened spring and an early summer. If you think this seems like way too hot of a forecast for this early in the year, you’re right. “In Des Moines, the normal high is 81 degrees. Up in Waterloo, the normal high is right around 78 and our forecast is in the middle 90s, maybe even the upper 90s,” Kotenberg says. “We’re going to be a solid 15 degrees above normal for temperatures.”

Due to the forecast, he says it’s likely statewide heat advisories will be issued soon for the steamy days ahead. “Heat index values are going to be over 100, pushing 105 degrees, and it’s really the consecutive days of this that cause the problems,” Kotenberg says. “Temperatures overnight won’t cool much below the low to mid-70s. When you compound things like this is where we really start to run into the heat issues, healthwise.”

A few tips to handle the heat: Wear light-weight and light-colored clothes. Drink plenty of water. If you’ll be working outside, take frequent breaks. Never leave children or pets inside vehicles. Make sure pets and livestock have access to water. Also, check on your friends and neighbors, especially the elderly, to make sure they’re doing okay.