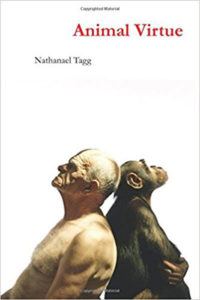 A central Iowa native is releasing a book of poetry, his first. Nathanael Tagg, originally from Webster City, is the author of “Animal Virtue.”

“There’s about 50 poems in it and it started out as my thesis when I was at Rutgers,” Tagg says. “My capstone project was to write a book-length work of poetry. After I graduated, I didn’t think it was done and didn’t want to publish it yet, so I spent a couple more years revising it.”

Tagg is now an associate professor of English at Cecil College in Maryland. “I’m influenced by Walt Whitman, Emily Dickinson, some of the classic poets, but also more contemporary writers like Thomas Lux. He’s one of my favorites because he writes really accessible, funny poems,” Tagg says. “You don’t have to have an MA in English to understand and appreciate his stuff.”

Like his literary heroes, Tagg says he aims to make his poems easily understandable without a lot of pretext. “I think that comes through in my writing,” Tag says. “I’m trying to write to communicate. I’m okay with a little bit of

mystery but hopefully there’s a layer of meaning in each poem that any intelligent reader can pick up on and appreciate.”

The book is being published by Word Tech Editions and it can be ordered through Amazon and at Barnes and Noble.com.  Tagg will appear in Webster City to read excerpts from his book on June 28th, with another reading tentatively planned in Orange City later in the summer.