You are here: Home / Fires/Accidents/Disasters / Work on Cedar Rapids flood protection continues a decade after 2008 devastation 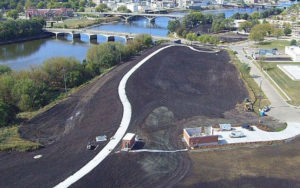 The Sinclair Levee built of flood protection in Cedar Rapids includes a bike path on top.

While it has been 10 years since the Cedar River crested at a record flood level of 31 feet to swamp Cedar Rapids, the work on building flood protection still continues.

Assistant City Manager, Sandi Fowler, says high water again two years ago showed the need to keep working. “Certainly we showed in the 2016 flood fight that with Hesco Barriers and berms and a lot of work underground and the stormwater system, that we are able to protect to a certain level. That was a 22 foot crest — but we know we need permanent flood protection,” Fowler says.

Part of the fight has been securing federal dollars to help erect a $375 million permanent flood protection system. “We continue to have lots and lots of conversations to secure the federal funding through many avenues, including the Water Resources Development Act,” Fowler says. “We feel confident that some day the federal government — maybe sooner than later — the federal government will come through with their piece. A piece of it. We certainly have a lot of funding pieces in place.” 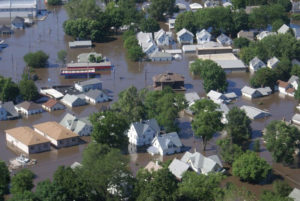 She says one of the things they discussed early on was creating flood control that integrated into the communities along the river. Fowler says you can see how the planning and discussions have followed through on that idea. “We just opened the Sinclair levee, it has a bike trail on top of it so you can see the scenic area of Czech Village and NewBo from the top of the levy. So, we want to make sure as we build this flood protection it is going to ensure the economic investment in our community and the protection of homes and businesses,” Fowler says.

Fowler says while flooding is a fact of life along the river — people didn’t want big cement walls between them and the water. “We heard that loud and clear from the neighborhoods and from the community as a whole,” according to Fowler. “We want the flood protection to integrate into the neighborhood. We want it to be transparent, look like the neighborhood that it is in. We don’t want to be cut off from the river.”

She says it’s a part of their heritage. “We’re a river community and we want to make sure that we still celebrate the river as a part of our community — which means exactly that — how do you interact with the river at the same time that you are making sure that you are protecting yourself when things go poorly with it,” Fowler explains. She says they’ve managed to do that so far with the improvements made.

Fowler says they have two pump stations that really are big part of protecting our community from the underground river flowing back into the neighborhoods. She says they also have underground pieces in place in the Czech Village and are building a levee there. “We are about ready to kick off the extension of the Quaker Oats flood wall to protect that big industry in our community. So, there’s a lot of really positive things that are happening that are real flood protection, and we’re really excited about that.”

Fowler says the flood protection goes along with the buyouts of homes in the flood areas to ensure that residents don’t have to go through the same types of losses they suffered in the 2008 flooding.