You are here: Home / Agriculture / Two mega grain bins will hold millions of bushels of corn for Atlantic ethanol plant 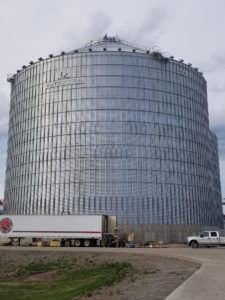 An ethanol plant in southwest Iowa features two of the world’s largest free-standing grain bins, big enough that you could park a 757 inside each one.

Elite Octane, in Atlantic, has two bins that are 156-feet in diameter and about 16 stories tall, each with a capacity of two-million bushels of corn. Elite Octane president and CEO Nick Bowdish says a big investment is hidden under the bins.

“We’ve got $1.4-million stuck in the ground,” Bowdish says. “There’s 1,384 concrete piles about 16-inches in diameter and 14-feet deep with both bins combined. That’s all structural support to hold the weight of what these bins store.” The two bins were built by Sukup  Manufacturing, based in Sheffield. It took some 200 semis to supply all of the materials to construct them.

Beside the monster bins is the corn-receiving area. Bowdish touted the speed and efficiency of the grain dumping process. “When you time it and you stand here, the farmer pulls in and opens both doors, it’s right at one minute for the grain to fall out of his trailer,” he says. “By the time he rolls his doors shut, gets back in his truck, pulls out and the next truck pulls over the pit, that takes about one minute. At that point, the pit’s empty and the next truck is wide open again.”

As part of the fuel-making process, yeast will be sitting in huge tanks for around 60 hours, eating sugars and creating ethanol and carbon dioxide. “The CO2 is all collected, run through a scrubber — to make it absolutely pure — and then today, we vent that to atmosphere,” Bowdish says. “There are some plants that will spend money and add on a side project where they compress the CO2 and sell it to bottling companies like Coca-Cola or some people make dry ice out of it. That might be something we look at down the road.”

The plant plans to ramp up to near-capacity production next week. It has a holding capacity of six-million gallons of ethanol which Bowdish says is about 15 days of production for the plant.