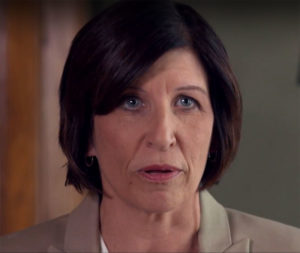 “I decided this is a challenge that is really important,” Hart told Radio Iowa. “It’s important for the state of Iowa and I needed to step up and answer the call.”

Hart is a farmer and former teacher from the small eastern Iowa town of Wheatland. Delegates at the Iowa Democratic Party state convention are expected to ratify Hubbell’s pick for his lieutenant governor running mate later today.

“My background as a teacher, as a farmer, as a mother, as a volunteer gives me the experiences and the background that will benefit me in this position,” Hart said. “My experience as a legislator has given me some background there that will be helpful and I think my interest in a lot of issues that are important to the people of the state of Iowa will always help me to do a good job on their behalf.” 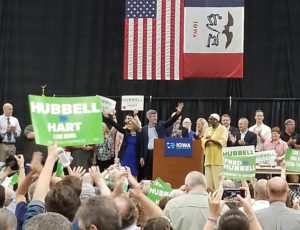 Hubbell, Hart and the Democrats at their convention.

Hart and her husband have been operating his family’s century farm near Wheatland since 1986. They are the parents of five children. Hart, who is 62 years old, taught school for more than 20 years in the Calamus-Wheatland and Bennett school districts. She’s been a state senator since January of 2013, representing all of Clinton County as well as northern and eastern parts of Scott County. Hart’s 2018 bid for reelection to the state senate has ended as she emerges at the Democratic Party’s nominee for lieutenant governor.

“We’re ready to get started and roll up our sleeves and get to work,” Hart said.

She pledged to “fight tooth and nail” alongside Hubbell in the top-of-the-ticket race.

“And when I believe in something, I’m all in,” Hart said.

Lieutenant governors in Iowa were independently elected until 1990. That’s the year a constitutional change took effect and party nominees for governor began choosing a lieutenant governor as a running mate, in the same way the president and vice president run together as a team. In the past seven gubernatorial elections, Republicans and Democrats have presented voters with “gender balanced” tickets.