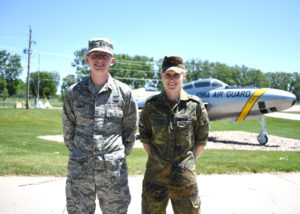 A German Luftwaffe officer was in Iowa this week as part of a military reserve exchange program.

Lieutenant Julia Renke, a personnel officer from Germany’s Air Force, visited Sioux City’s 185th Air Refueling Wing. “It’s a great opportunity to get to know American units, as kind of an ambassador between both countries,” Renke said. “It gives you an inside look, which you wouldn’t get in different ways. So, this exchange program between Germany and America is just a special experience.”

Renke took flights on aircraft housed at both the 185th in Sioux City and at the 132nd Wing in Des Moines. “I got to ride on a Black Hawk (helicopter) and I got to go on the KC-135 on a mission,” Renke said. “We saw some F-16s getting refueled, which was amazing for me to get to experience.”

As part of the Defense Military Reserve Exchange Program, 1st Lieutenant Joshua Thomas — Sustainment Services Flight Commander with the 185th — will visit German bases in September. It’ll be his first trip overseas. “I’m very excited to go to Germany for two weeks…and learn their military programs and how both the reserves and active duty units work over there,” Thomas said.

Another officer from Germany and the 132nd Guard unit in Des Moines are also been taking part in the exchange program.