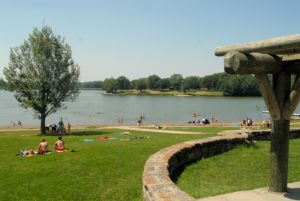 Two children were flown to Des Moines hospitals in separate near-drowning incidents over the weekend at state park beaches.

Alex Murphy, spokesperson for the Iowa Department of Natural Resources, is reminding parents to keep a close eye on their kids’ whereabouts and have them wear life jackets – even though they’re not required for swimming at a state park beach. “There are no laws that say kids or anyone has to wear a life jacket when they’re in those swimming areas,” Murphy says. “But, I always tell people it’s the best idea to wear a life jacket. That could literally save a life.”

A two-year-old girl disappeared while swimming at Big Creek State Park near Des Moines on Saturday night — and was found underwater. CPR was performed, the child was revived and last reported in critical condition. A similar situation happened Sunday at Rock Creek State Park in Jasper County where a nine-year-old was rescued.

Murphy says swimming at a state park beach can be dangerous, as the floor of the lake can drop off suddenly. “When you’re visiting the lakes and beach areas, you’re going in at your own risk. This isn’t a controlled swimming pool, like a city swimming pool where there are lifeguards on duty. There are no lifeguards on duty (at state park beaches),” Murphy says. “It doesn’t matter whether you’re an avid swimmer or not, nobody knows exactly what those conditions are like under there. Everybody needs to take extreme caution when you’re out there at the beach.”

Two other incidents on Iowa waterways claimed lives over the weekend. On Friday, a Minnesota man drowned in the Des Moines River while trying to save his 7-year-old niece. It happened below Red Rock Dam in Marion County. The girl was rescued by a boater and transported to a hospital.

In Wapello County, a fisherman disappeared Saturday morning on the Des Moines River in Ottumwa. His boat was found, unoccupied, later in the day. The body of 79-year-old Richard Mart, of Ottumwa, was recovered from the river Monday morning.