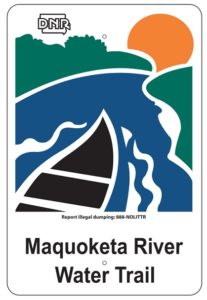 Iowa’s newest official water trail was dedicated over the weekend with a ceremony in downtown Manchester. The Maquoketa River Water Trail is the first such attraction in the state to include a whitewater park.

John Wenck, Water Trails Coordinator for the Iowa Department of Natural Resources, says the trail starts in Iowa’s oldest state park. “Basically, it stretches from the edge of Backbone State Park down to Bailey’s Ford County Park, which is about 18 miles,” Wenck says.

The Maquoketa River Water Trail project took several years to develop. There were many parties involved and they all needed to back the idea. “We listened to landowners who live along the river, we listened to anglers and paddlers,” Wenck says. “Of course, the City of Manchester and the (Delaware) county conservation board have both been really strong supporters of this.”

Wenck says the process followed by those groups could serve as a model for other communities looking to develop an official water trail. “I’ve never seen a community come together like the city of Manchester,” Wenck said.

The Maquoketa River Water Trail has a lot to offer for sightseers, including limestone cliffs, mature oak forests, lowland forests, and diverse wildlife. According to Wenck, Iowa now has over 930 miles of state designated water trails.