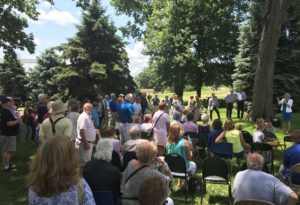 Fred Hubbell, the Democratic candidate for governor, and Rita Hart, his running mate, went to Clinton today to meet with Hart’s hometown supporters. Hart, a farmer from nearby Wheatland, told the crowd it was a difficult decision to join the Hubbell campaign and end her bid for reelection to the state senate representing Clinton County and parts of neighboring Scott County.

“It has been such a pleasure to serve you guys, to work with you and for you for six years,” Hart said. “I look at each one of your faces and I see a memory there.”

Today’s campaign event was originally scheduled inside Clinton County Democratic Party Headquarters, but moved outdoors to a park across the street because of the overflow crowd. Hubbell promised the audience Governor Kim Reynolds has pursued a “shortsighted and destructive agenda” that he and Hart will reverse. Hart said she and Hubbell are pursing a “put people first” agenda.

“You are the people we need to fight for and with,” Hart said, “and that’s what we’re going to do as we continue on this great journey.”

Democrats from Clinton and Scott Counties will meet soon to select someone else to run for Hart’s state senate seat, but no date has been set yet for the district nominating convention.