You are here: Home / Agriculture / When facing a bee infestation, this guy won’t tell you to buzz off 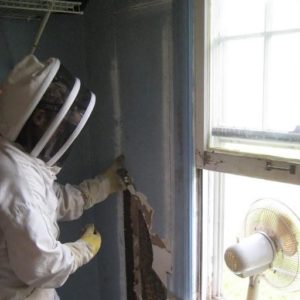 Discovering a large swarm of bees in a hollow tree or in an abandoned building can be unnerving. For some Iowans, the first instinct is to destroy the insects, but there are alternatives.

Sixty-two-year-old Jeff Becvar of Indianola is a bee removal specialist. He says it’s not an easy task, but the honeycomb and its residents can be relocated.

“I use a bee vacuum to collect up all the excess bees,” Becvar says. “They are not harmed. They are actually put into a hive-box that’s converted into a vacuum with a vacuum head on top of it and they’re ventilated as well so they don’t suffocate or overheat.”

Becvar has been using this specialized skill for more than 26 years. He says it’s hard work and it can be dangerous for both the bees and those doing the removal.

“It’s extremely difficult,” he says. “The one I’m working on currently, three beekeepers have looked at it and all three have backed away from it. Not everyone is prepared for this. It’s a pretty daunting task to open up somebody’s house, get in there and remove bees.”

Becvar and a few other bee removal specialists in Iowa are called on an average of 85 times each year. He says the prime time for “cut outs” as they’re called is mid-May through August.

He says he gets stung nearly every time.