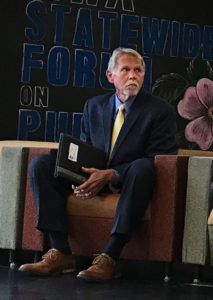 Iowa Department of Corrections director Jerry Bartruff says the state is facing “new and, in some cases, daunting challenges” when it comes to public safety.

“The rise of the opioid crisis, rising violent crimes and arrests in rural areas, disparities in our criminal justice system and an ever-growing population of persons with mental illness and other behavioral health issues in our jails and prisons are just some of the troubling areas we really need to start to address collectively,” Bartruff says.

Bartruff made his comments early this morning at the opening of a day-long forum on public safety at the state women’s prison in Mitchellville. Iowa Department of Public Safety Commissioner Roxann Ryan said the forum is focused on problem solving. 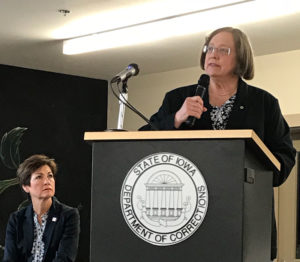 “Public safety has always been one of the foundations of every community,” Ryan said. “I hope that our discussions today will lead to many more discussions throughout the state. The ideas that we discuss today will be the policies and programs that we develop tomorrow.”

Governor Kim Reynolds gave a welcoming speech at the forum and touted some already launched policies, like apprenticeship programs in the state prisons for inmates who’ll eventually be paroled.

“We need to give hope to incarcerated Iowans so that they can make positive decisions,” she said, “and begin new lives upon release.”

Legislators, officials from several state agencies and mental health advocates and are among the dozens of people who stayed to participate in the forum.