You are here: Home / News / King says ‘nothing cruel’ about separating kids from parents at southern border 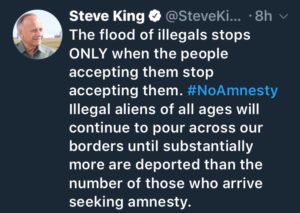 Republican Congressman Steve King has been an active tweeter today, urging people to call congress and voice their opposition to bills that would provide what King calls “amnesty” to anyone who entered the U.S. illegally.

King tweeted out a link to an interview he did with TMZ about the separation of children from parents crossing illegally at the southern border. King told the TMZ cameraman there is “nothing cruel” about the way the children are being treated and they are not being held in cages.

King has toured detention centers near the southern border before. The use of chain link fencing is needed, King has said, to separate the boys from the girls.

King also said on Twitter today that the only way to stop what he describes as a “flood of illegals” is for the U.S. to deport “substantially more…than the number of those who arrive seeking amnesty.”