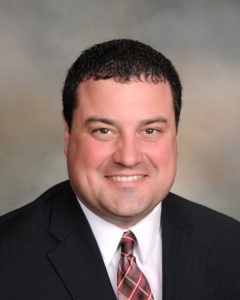 A former Ames City Councilman is now the Republican challenging long-time State Treasurer Mike Fitzgerald, a Democrat. Jeremy Davis was nominated this past weekend by delegates at the Iowa Republican Party’s state convention.

AUDIO of Davis’ nomination and speech, 5:00

Davis, who grew up on a Jones County farm, worked in Congressman Steve King’s Ames office and is now director of grassroots programs for the National Pork Producers Council. Davis has run for office twice before — an unsuccessful bid for the state senate in 2014 and, in 2009, when he won a term on the Ames City Council.

“I believe one of the most important things about being state treasurer is that we need to have 100 percent transparency when it comes to our financial operations of government,” Davis said. “I believe that it is inappropriate that the current state treasurer has utilized public funds to promote programs that he administers leading up to an election.”

Fitzgerald’s office has paid to advertise the “College Savings Iowa” program and the “Great Iowa Treasure Hunt” which seeks to connect Iowans with unclaimed property. A spokesman for Fitzgerald’s campaign says no tax dollars have been used in the advertising, because both are “self-sustaining programs.”

“Dmeocrats need to assert themselves and Iowans know it because the Republicans have been so irresponsible at all levels,” Fitzgerald said. “You know, the state budget — it’s a mess. It’s a real disaster.”

Fitzgerald, who is seeking a 10th term as state treasurer, said Republican control of the statehouse has had “terrible consequences.”

Tom Miller, a Democrat who has served as the state’s attorney general for 35-and-a-half years, is also seeking reelection, but will not face a Republican opponent this fall. Libertarians nominated Marco Battaglia of Des Moines to run for attorney general. Battaglia unsuccessfully ran for governor on the Libertarian ticket on June 6th.