You are here: Home / News / Rain, rain, not going away today 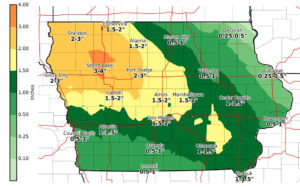 Forecasters say up to five inches of rain may fall today across parts of northwest Iowa, drenching some areas that are already water-logged.

Meteorologist Allan Curtis, at the National Weather Service office in metro Des Moines, says with more rain predicted into the weekend, it’s raising concerns about flooding across a wide section of Iowa’s western half.

“We’ve had quite a bit of rainfall so far, kind of priming the soils and getting river levels up relatively high,” Curtis says. “With another couple of rounds of rain expected over the next two days, it’s setting us up for the potential for some moderate-to-significant river flooding or flash flooding.” While northwest Iowa has already seen heavy rain the past few days, Curtis says that same region is in the target zone for more, especially the area from Storm Lake to Fort Dodge.

“It wouldn’t be too surprising if we get relatively widespread two-to-three inches and then locally, it certainly wouldn’t be surprising if we saw four, even pushing five inches in some locations,” Curtis says. “As you can imagine, with relatively wet soils, flash flooding is certainly a concern over urban areas, let alone open fields.” For the moment, there is little concern for any flooding in eastern Iowa, rivers like the Cedar and Iowa or even the Mississippi.

Curtis says, “At this point, it looks more like the western half of the state, so the Des Moines and Raccoon, even as you get further west, a lot of the rivers feeding into the Missouri River basin, those are the ones that are going to be closely watched especially tonight and on through the end of the week.”

Much of Iowa’s western half is already under a Flash Flood Watch. Curtis reminds Iowa motorists to “Turn around, don’t drown” as they approach water-covered roadways and to be especially cautious at night.