You are here: Home / News / No injuries reported as 7 twisters touched down Wednesday 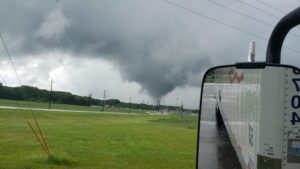 Cris Johnson tweeted this photo of a tornado near Perry.

Meteorologist Cory Martin, at the National Weather Service office in metro Des Moines, says there are no reports of anyone getting hurt. “Yesterday, we had reports of up to seven tornadoes in the state,” Martin says. “It looks like they were all weak in nature. We had very few reports in the way of damage. We will be going out near the Perry area today to investigate some reports of damage that was passed along to us.”

That likely twister near Perry reportedly downed a few trees and ripped the shingles off some homes. Other tornadoes were spotted near Chillicothe, Eldora, Hubbard, New Providence, Paton and Scranton. Heavy rain brought flash flooding in several areas, including in northwest Iowa where several areas reported more than three inches of rain, and Davenport in the east, which reported four inches of rainfall.

“We saw some heavy rain yesterday but it’s more been just the accumulation over the week with several rounds of rain that’s starting to cause problems, especially with our rivers in central Iowa,” Martin says. “We’re seeing some pretty substantial rises in the Raccoon and Des Moines River basins and even as far northeast as the Cedar River as well.” Flood warnings, flood watches and flash flood watches are posted in counties scattered across the state and still more rain is in the forecast.

“Correct, we may see more showers and storms this afternoon into the early evening but then it looks like this low pressure system that’s been a nuisance for us most of this week is finally going to depart the area,” Martin says. “It looks, generally, quiet through the weekend.” Keep up with the changing forecast at weather-dot-gov.