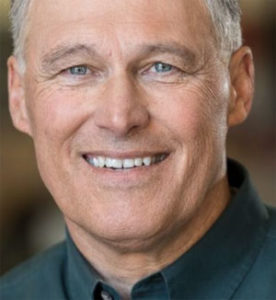 The governor of Washington state is in Iowa, campaigning with and for Iowa Democrats. Jay Inslee, who is also the chairman of the Democratic Governors Association, campaigned this morning with Fred Hubbell, the Democrat who’s challenging Republican Governor Kim Reynolds.

“The Cook Report just switched this to…a toss up race,” Inslee said, “so this is what you want in life, which is a competitive race.”

There are governors races in 36 states this year and Iowa is among 26 states with a GOP incumbent. Inslee said the governor’s race here is a “top tier” race for the Democratic Governors Association for a variety of reasons.

“We’re in a moment where people are very concerned about the divisiveness and the intolerance that have been fanned by the occupant of the White House and you have an incumbent who’s been an enabler of the White House, which is sort of sad,” Inslee said.

Washington is the lead state in a lawsuit challenging the Trump Administration’s policy of separating children from parents crossing into the country illegally as well as President Trump’s executive action that signaled a new policy will be enforced until congress passes an immigration bill.

“Independents, many Republicans, Democrats really have had a belly full of the chaos coming out of Washington, D.C.,” Inslee said, “and they understand we need someone who can unite Americans and Iowans around practical solutions rather than divisive ideological battles.”

Inslee made his comments during taping of an “Iowa Press” program that will air on Iowa Public Television next week. He downplayed the idea he’s laying the groundwork for a presidential race, telling reporters he’s focused on helping Democrats win in 2018.

Tonight, Inslee will be the keynote speaker at the Iowa Democratic Party’s Hall of Fame Dinner in Des Moines. The Republican Party in Washington state criticized Inslee for “promoting himself” more than 1700 miles away from Olympia, Washington. The Iowa Republican Party’s spokesman said Inslee is coming from the “liberal stronghold” of Washington state to try to “prop up” Hubbell’s campaign.