You are here: Home / News / Reynolds says congress should act ASAP on immigration 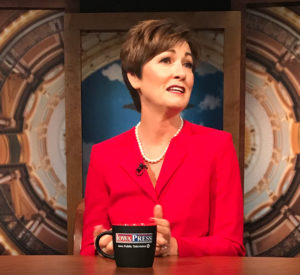 Iowa Governor Kim Reynolds is joining Republican governors from Maryland and Massachusetts in saying she would not send Iowa National Guard troops to the southern border if the soldiers are called to separate children from parents crossing into the country illegally.

“There are other issues — human trafficking, drugs coming across, safety at the border, then if that would be a request, then I would consider that,” Reynolds says.

While President Trump tweeted today said Republicans in congress should wait until after the November election to enact new immigration policies, Reynolds says she’d like to see congress act as soon as possible.

A new state law that takes effect July 1st will cut off state funding to any city or county in the state that fails to cooperate with federal immigration agents. Reynolds says the law will not trigger any immediate action, as she is “not aware of” any so-called “sanctuary cities” in the state.

Congressman Steve King has been an outspoken critic of any effort to provide what he calls “amnesty” to people who entered the country illegally. During an interview with Breitbart News, King said he did not want Somali refugees working in pork plants in his congressional district since Muslims do not eat pork. Reynolds says she disagrees with King’s on that, but she rejects the idea King’s string of headline-grabbing comments are making Iowa less attractive to businesses considering relocating or expanding here.

“I don’t think some of the comments he made are absolutely reflective of Iowans and who we are as a people,” Reynolds says. “He is one of over 4000 honorary chairs in my campaign…He is not involved in policy or issues that we’re working on and the fact of the matter is he does represent over a fourth of the state, so people that live in his district.”

Reynolds made her remarks during taping of the “Iowa Press” program which airs tonight at 7:30 on Iowa Public Television.