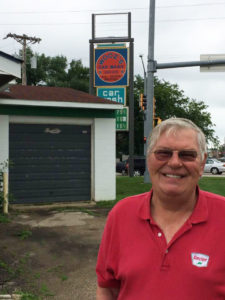 Wooz’s Car Wash has been a fixture since 1972, but owner Henry Pirhonen has accepted an offer to sell the property to Kwik Trip which plans to build a Kwik Star store there.

Pirhonen says the new store will do well in that location, but people will miss the full-service Wooz’s provided. “We pump the gas for the customers, talk to them,” Pirhonen says. “A lot of our customers are saying right now, ‘Who are we going to talk to anymore?’ That’s one of the advantages we have here is that we communicated with the customers on the island.”

It’s believed there are perhaps only two or three full-service gas stations remaining in Iowa, though they were common decades ago. “We’ve had customers that have come here for 30 or 40 years and they’ve never seen the inside of our office,” Pirhonen says. “If they wanted a pop, we brought it to them. If they wanted a lottery ticket, we brought it to them. We’d check their tires and oil and everything.”

The station’s car wash was always popular and has scrubbed perhaps a half a million cars since Pirhonen took over the facility. He says they’ve sold a wide array of products besides gasoline over the years, including Christmas trees.

“What happened was a semi driver came in here and I said, ‘Where you going?’ and he said, ‘Nowhere, I’m idle right now,’ so I said, ‘Let’s go up north and get some Christmas trees.’ We went up north to Minnesota, north of Minneapolis, and got about 600 or 800 Christmas trees and sold them that year.”

Prior to the digital age, the service station was also once home to a photo hut, where people could drive up, drop off their film, and return later for an envelope filled with their pictures.

Officials with Kwik Trip Incorporated say construction on the new store will start next spring.