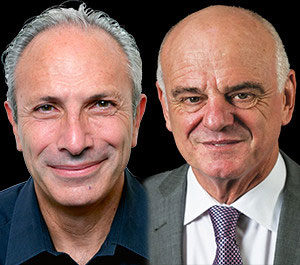 The 2018 World Food Prize will be presented in Iowa later this year to two men from Britain.

World Food Prize President Kenneth Quinn today revealed the selection of this year’s laureates – Lawrence Haddad and David Nabarro.
“Through their leadership, our laureates have inspired efforts by governments and by countless thousands and thousands of others, which between 2012 and 2017, reduced the number of stunted children in the world by 10 million,” Quinn said at a ceremony at the U.S. Department of Agriculture in Washington, D.C.

Haddad and Nabarro have been working separately to fight malnutrition and food insecurity. “Those improvements have come in countries around the globe, some of which are represented here today – Bangladesh, Nepal, Malawi, Tanzania, Kenya, Ghana,” Quinn said. The 59-year-old Haddad is an economist who is executive director of the United Nations-created Global Alliance for Improved Nutrition. It was launched in 2002 to tackle human suffering caused by malnutrition.

Nabarro is a 68-year-old physician who has coordinated U.N task forces on food insecurity and hunger. He also led the U.N. response to the cholera epidemic in Haiti following a 2010 earthquake. The men will be honored at a ceremony at the Iowa Capitol on October 18.

The Iowa-based prize, often referred to as the “Nobel Prize for food and agriculture,” is awarded annually to individuals who’ve helped improve the quality, quantity, or availability of food in the world.