You are here: Home / Agriculture / Branstad says the potential is great if trade issues with China settled 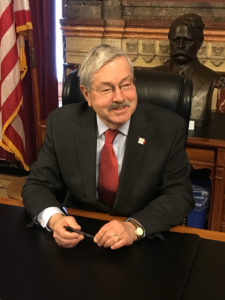 Former Iowa Governor Terry Branstad says the Trump administration will continue to stand firm on trade issues with China, despite the impact the dispute is having on agriculture.

“If we get this resolved, the potential here is great,” Branstad says. The 71-year-old Branstad, who became the U.S. Ambassador to China just over one year ago, says it’s critical for farmers in Iowa and across the U.S. to have free and open trade with China.

“Nearly 1.4 billion people, a growing middle class with income going up an average of 6.75 percent a year…this is a significant market,” Branstad says. Branstad says the trade potential with China is huge because it can’t produce all the food and protein it needs to meet the needs of its middle class and Chinese consumers like the quality of U.S. food.

“They recognize they can’t produce enough soybeans or some of these other agriculture items that they need on their own,” Branstad says. China buys about 60-percent of all the soybeans traded in the world and Iowa is among the top soybean-producing states in the U.S.

But, Branstad says China has to change to avoid a trade war with the U.S. He says the Trump administration is not willing to accept only a few changes in China’s policies while the trade deficit grows larger and the stealing of intellectual property gets worse – and, Branstad says, China knows it.