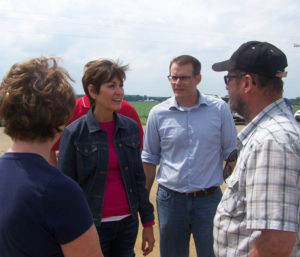 Governor Reynolds and Lt. Governor Gregg during a tour of the train derailment near Doon.

For the second time in three days, a large portion of the northwest Iowa town of Rock Valley is under a mandatory evacuation order.

“With the flood that we had, all of the flappers in Rock Valley that keep the water from coming from the river back up through our storm sewers, they are closed, it’s all automatic and we can’t open those,” Mayor Van Otterloo says. “With all the rain coming in, we have to get that rainwater out of the city, over the berms and out into the river. We have huge pumps down there and they cannot keep up.”

The mayor has also ordered a travel ban within the Rock Valley city limits. “I have ordered no vehicle traffic and that is highly important,” Van Otterloo says. “We’re going to have cars stuck and we can’t get emergency vehicles through. The water is very deep. We need everyone to understand, you cannot be driving around in Rock Valley. If a police officer catches you driving around, you will be arrested.”

The mayor doesn’t have a number of Rock Valley residents who’ve been impacted by the flooding, nor is there a number being released of those who’ve been evacuated.

“I know there’s a lot of homes getting water in their basements,” Van Otterloo says. “We’re doing everything we can to get the pumps situated. We have more coming in from Hartley but it takes a little time. We’re pumping the water out as fast as we can.” Governor Kim Reynolds visited Rock Valley on Saturday and the site of last week’s train derailment. More than 30 rail cars jumped the flooded tracks. Fourteen of the cars leaked some 230-thousand gallons of oil. The governor says BNSF railroad is in the clean-up process:

“They’re working as fast as they can to get a road in place to where they can start to drain the cars and then remove the cars,” Reynolds says. “They’re working diligently to get that done.” Governor Reynolds says the railroad is working to access the wrecked cars so that the remaining fuel can be offloaded before the cars can be moved.

“There’s a lot of mud right there and they’re sunk in pretty good,” she says. “They have to remove the contents before they can even begin, especially as volatile as the soil is right now, with the amount of water that we’ve had.” Reynolds says the Iowa National Guard is standing by, but she doesn’t think troops will be needed for flood assistance or for the train derailment cleanup process.