You are here: Home / Agriculture / Crops look good in most areas of Iowa, some face flooded fields 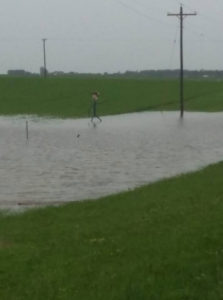 Pond of water near Stanhope.

The U.S. Department of Agriculture’s weekly update on Iowa crops is usually strictly business and released after the grain markets close for the day.

Monday’s report had a bit of tongue-in-cheek message. It noted Iowa farmers had only two-days suitable for field work during the past week and says activities included “checking rain gauges and assessing flood damage.” Iowa State University Agronomist, Paul Kassel, says many north and central Iowa corn and soybean fields are under water.

“It’s getting king of serious really. People have had eight-ten–twelve inches of rain in the last ten, twelve days. Kind of the north-central area really,” Kassel says, ” There’s a lot drowned out. So the corn and soybean crop will die from that.”

Once the crops die, the farmers have a decision to make.

“And people will be faced with replanting parts of fields and that kind of thing,” Kassel says. He says if things don’t dry out soon, there may not be any option to salvage any kind of crop.

“We’re not out of time, but by the time it dries out, it might be too late for that. So, there you’re faced with zero production from those drowned out areas,” Kassel says. Despite that extensive crop flooding — Monday’s U.S.D.A. update continues listing about 80 percent of Iowa’s corn and soybean acreage in good-to-excellent condition.