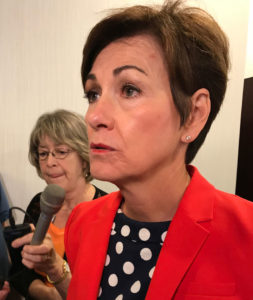 Governor Kim Reynolds says she backs the process the state Transportation Commission has undertaken to determine which, if any, interstate rest stops and parking areas will be closed. The public may submit comments to the Iowa DOT right now.

“This is their opportunity to weigh in and talk about how it would impact them and then once they gather all the comments, the DOT commission will review that and they’ll make a decision going forward,” Reynolds told reporters today.

The public comment period runs through September of next year. That’s about the time a study will conclude that’s measuring how heavily truckers use the rest stops and parking areas to take required rest periods.

“We do have some of the larger trucking stops now that are trying to put in place parking and overnight and they have areas where they can go in and actually shower and abide by the rules that are in place,” Reynolds said. “We are seeing more and more of those and I hope that’s been a part of the study that they’ve looked at when they made the recommendations to close those. I haven’t looked at the report or what they’ve looked at, so that’ll be part of the process moving forward.”

Six of the “low rated” rest stops are in western Iowa; two are in southern Iowa, one in far eastern Iowa and two in central Iowa.