You are here: Home / News / Congressman King urged no vote on bill he called ‘instant amnesty’ 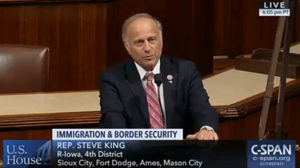 Congressman Steve King was among those urging his Republican colleagues to vote against a bill in the U.S. House that King says is “instant amnesty” for more than five million people living in the country illegally. The bill failed to pass the Republican-led House early this afternoon.

“Since Ronald Reagan signed the amnesty act in 1986…it set up the sign again that said: ‘If you can get enough people into America that have broken our immigration laws, sooner or later there’ll be another amnesty,’ there have been six other lesser amnesties since 1986, but this one would be the biggest one in the United States of America,” King said recently during an appearance on C-SPAN’s Washington Journal.

King argued enclaves of immigrants who’ve entered the country illegally are failing to assimilate into the U.S.

“We’ve got to secure the border,” King said. “We’ve got to restore the respect for the rule of law or we’ll never be a sovereign nation again and we’ve gone through a lot of damage.”

King said President Trump’s recent executive order stopping the separation of children from parents who crossed the border illegally was “the best temporary solution” given the public reaction, but King said a permanent fix is needed.

“This doesn’t turn down the magnet for people to come to America,” King said. “We’ve got to shut that magnet off.”

King also has addressed questions about his re-tweet of a Nazi sympathizer’s views on immigration issues. King said he retweeted a Breitbart headline without researching the article’s author because the headline indicated Europe is waking up to the danger of unlimited immigration.

“If we destroy the nation-state with globalism, then you merge all these cultures and we’re back to being scrambled again,” King said. “And I think we’ve got to respect all people in the world, but let’s respect ourselves enough to know that we’ve built something in America that has never been matched in the history of the world. Let’s not destroy it over some myopic idea that all cultures are equal. They’re not.”

During his appearance on C-SPAN, King said people who’ve criticized him for his tweet either “don’t understand the English language” or are “willfully” trying to mislead the public.