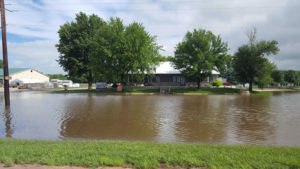 After multiple heavy thunderstorms in recent days has many rivers are running at or above flood stage. Some areas of northwest Iowa have seen 12-inches of rain — or more — in the past ten days.

Hydrologist Mike Gillispie , at the National Weather Service, says efforts are being made upriver to minimize flooding in the Missouri River valley. “The Corps of Engineers was able to cut back on releases from Gavins Point Dam ahead of a lot of this rain or as this rain fell,” Gillispie says. “That’s allowing the James, Vermillion and Big Sioux to drain out a little bit faster than if they were still releasing the 45,000 CFS (cubic feet per second) they had been doing there.”

Gillispie says some of the rivers and streams in northwest Iowa will be slower to fall. “We’re looking at the Little Sioux River, it’ll probably be a week-plus, maybe two weeks of fairly dry weather before we see most of that getting back below flood stage,” he says. “The Floyd will be a little bit quicker. It’s a little faster to go up and down but we’re still likely looking at a few days, possibly into the weekend, before that gets back down.” Gillespie says the storms that brought us all of this rain are not typical for summer.

“This last week has just been really kind of a weird system that came through, or a couple of systems that came through, in that it was more of a springtime system,” he says, “but it had the warmth and the moist air to work with so it was a very efficient precipitation maker.”

The forecast calls for mostly hotter and drier weather for the next several days, which will help with flooded fields and roads.