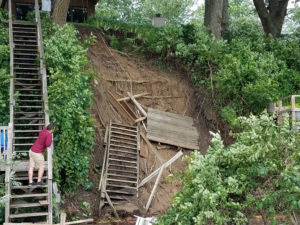 Continued heavy rains have raised the water level of the northwest Iowa Great Lakes and are causing erosion concerns.

DNR fisheries biologist Mike Hawkins says the levels have risen at least two feet above the crest level. “This isn’t setting any records by any means on our lakes as of yet — but we are definitely at that stage where some shorelines and even some public infrastructure start to get in danger,” Hawkins says.

He says they’ve started to notice more problems along the banks of the lakes. “The saturated soils around the lakes are causing come collapses of the shorelines, some mini landslides and things like that coming into the lake,” Hawkins says. “So, we’ve been working with the landowners and advising them of some things that they can do now.” Hawkins says there are also some concerns away from the direct shoreline.

“Up slope — especially on some of the high banks around the lakes — those soils can get really saturated and actually cause some slumps or small landslides to occur. Those are really hard to predict, they are very hard to predict,” Hawkins says. He says the Emergency Management Commission in Dickinson County has doubled the no-wake zone to 600-feet along shore of East & West Lake Okoboji, Upper and Lower Gar, Minnewashta Lake, Silver Lake at Lake Park and Center Lake.

“Trying to cut down on boat wakes that are near shore,” Hawkins says, “and really asking everybody to be responsible right now with their boat wakes as they recreate. We don’t want to turn folks away who want to come and have a good time. We still can do that, but we need to start considering the effect of our boat wakes along the shore line and the public and private infrastructure that’s along those shore lines.” Hawkins says they are in a much different situation than man-made lakes where engineers have some control over lake levels.

“In relative terms we don’t have anywhere near the fluctuations that you would see on a Coralville, Red Rock, Saylorville (man-made reservoirs). So, two feet doesn’t sound like a lot — but that’s pretty extraordinary for these lake. And we are heading into that area where a lot of flooding can occur along those shore lines and things like that,” according to Hawkins. He says the water flows out through the natural watersheds.

“We can’t manipulate them or take boards out or let more water out downstream — nor is that a good idea for folks who are dealing with water downstream,” Hawkins says. “They’re set up as natural waterways and that’s how they are managed.” Hawkins says they would really get concerned if the water continues to rise and gets to 30 inches above the crest line.