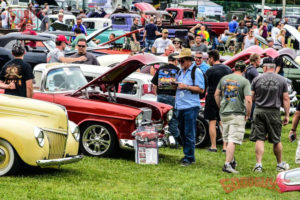 A summertime tradition nearly three decades running, some 4,000 gleaming classic cars will head for the Iowa State Fairgrounds in Des Moines this weekend.

“There are a lot of people who are getting into hot rodding and classic cars so we thought we’d have an expansion,” Bennett says. “We haven’t raised our cut-off year for 22 years, so we picked 1987 to give it some inclusion and to see what we’d get, and we’ve seen some really cool cars so far this year.” One feature of the three-day event is called Autocross, a closed-course racing competition designed to test vehicle agility and performance.

“Saturday, we’ll have the ‘Duel in Des Moines’,” Bennett says. “There will be the 16 fastest cars regardless of class, so the pro drivers will be up against the other drivers in the other classes for those top 16 spots, based on speed. Then, we’ll ladder them up and race them at the end of the day on Saturday.” There will also be live music, a kids’ zone, vendor exhibits, a manufacturer midway, a used auto parts swap meet, a cars-for-sale area, and a fireworks show on Saturday night. The event runs Friday, Saturday and Sunday.