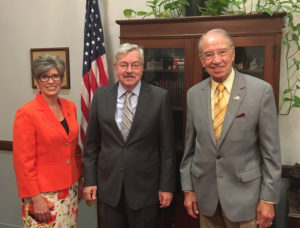 Senator Joni Ernst and the rest of the Iowa Congressional Delegation recently sent a letter to President Donald Trump expressing concern about the impact of trade negotiations on farmers in the state.

Ernst, a Republican from Red Oak, says process for handling trade issues isn’t exactly the way she would do it — but she says she the president does listen. “This president is very, very open and accessible, and more so than the last administration where we had even Democrats, some of my colleagues have stated they had very little if any interaction with the president,” Ernst says.

Ernst says she favors a more linear approach to handling the trade issues. “He is juggling a number of trade deals right now, which makes it very complicated,” Ernst says. “Of course I would prefer that he take up a trade deal, we get that deal done and we move on to the next.” She says in her talks with the president he has expressed confidence he can get the North American Free Trade Deal done by this fall.

Ernst says the president says Canada has been the problem in NAFTA, so they’ve encouraged the president to do a bilateral deal with Mexico while continuing to work on Canada. “Trade is so important for us, so while we have all these trade deals up in the air, we need to have some level of optimism moving forward that these deals are going to get done. So, I want to see action on it. I want to see that we do have NAFTA done,” Ernst says.

Ernst says they continue to remind the president of the concerns of farmers. “I know they are juggling a lot right now — it’s probably not the preferable way for Joni Ernst — but if we can get these deals done, I think our farmers will be doing well,” according to Ernst. “But I am extremely concerned in the short term on what it’s going to do to our markets.”

Ernst and Senator Chuck Grassley recently met with Terry Branstad, who is the former Iowa governor and now Ambassador to China to discuss trade with that country. “The ambassador did give us good feedback. I won’t discuss it openly today because of course we have a number of ongoing issues with China,” Ernst says. She says they also talked with Branstad about North Korea and while they have trade issues with China — China is important in helping to ensure the de-nuclearization of North Korea.