You are here: Home / News / July 1st all convicted drunk drivers in Iowa must use ignition interlocks 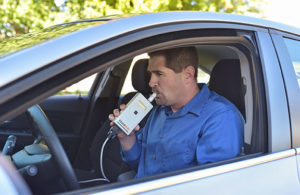 A new state law that takes effect this Sunday will force anyone with a drunk driving conviction to install an “ignition interlock” on their vehicle if they want to legally drive during their probationary period.

The devices test a driver’s breath and prevent the vehicle from starting if the driver has been drinking, but until now only repeat drunk drivers and first time offenders with a high blood alcohol level have been forced to use them in Iowa. Brad Fralick is a spokesman for Intoxalock, a Des Moines-based company that makes and installs the devices.

It costs about $80 to install the device, another $70 a month to rent it and then about $40 dollars to have it removed when the probationary period is over. Those fees are all paid by the convicted drunk driver.

“When they install it, it goes in the ignition module, so it’s going to be up under the dash,” he says. “It’s going to have a cord attached to it. It’s a relatively short cord…enough to allow you to take the test, but not so long that it would be easy for someone else to try to blow for you.”

After the engine starts, the devices periodically require another breath test to make sure the driver is sober and that no one else blew into the device to start the engine. Several states also require cameras which provide visual confirmation the driver is testing his or her own breath.

“We think that Iowa is going to go to camera devices,” Fralick says, “probably through the administrative rule process, so I would expect those to be in use in Iowa relatively soon.”

Iowa is now one of 30 states which require everyone convicted of drunk driving to install these devices.

“Unfortunately, with ignition interlocks, it’s a numbers game,” Fralick says. “The more of these you get into the vehicles, you see a corresponding impact on fatalities, crashes and arrests.”

A study published last year in the American Journal of Preventative Medicine indicated there had been a seven percent decrease in fatal drunk driving crashes in states where everyone convicted of drunk driving must test their breath before their vehicle will start. According to the Centers for Disease Control, the devices reduce repeat arrests for drunk driving by about 70 percent while they are installed.

Another alcohol-related state law goes into effect today. It reduces liability for bars and restaurants accused of over-serving alcohol to someone involved in a drunk driving accident.